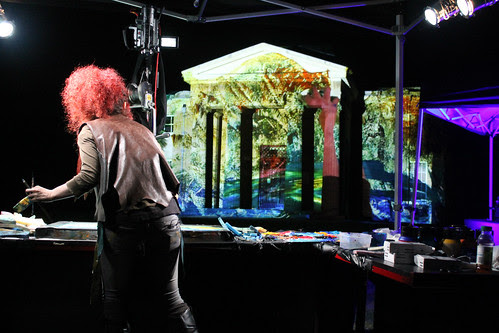 Last night saw the launch of a new artistic collaboration between Fine Artist Maria Rud and Projection Artist Ross Ashton. Together they have collaborated to bring together painting, music and projection mapping into one live experience. 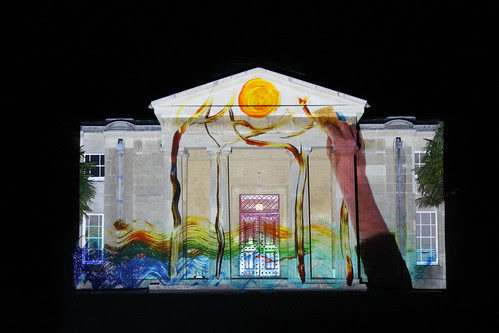 Dark Matter - A time lapse condensed version of the AniMotion process. from Ross Ashton on Vimeo.

Maria Rud has been working on a project that she calls ‘AniMotion’, for some time. This gives the audience the experience of watching an artwork being developed and created in front of their eyes as Maria interacts with a live music performance. 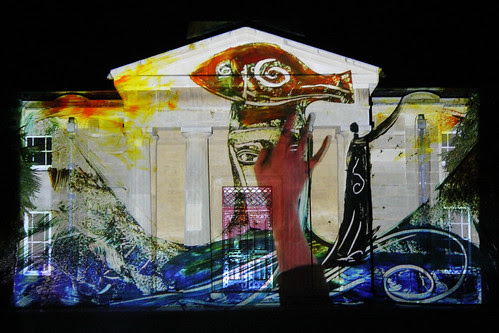 In collaboration with Ross Ashton, AniMotion has now been taken to a new level.  Ross has created a method of mapping the artist’s work directly to the architecture. This allows Maria to create in three dimensions, directly onto the building. She is free to reinterpret the architecture in real time using traditional painting methods. 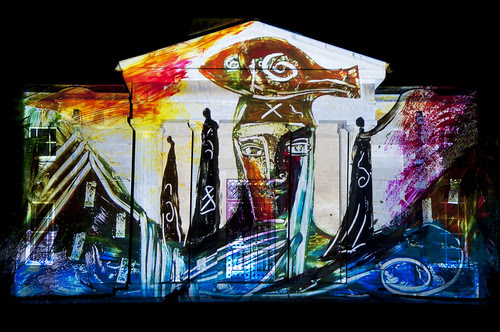 Maria Rud said, ‘By uniting music and painting through the art of projection, AniMotion immerses audiences in a world of transcendence.  By dissolving boundaries between art forms you reveal a whole new world and a new art form.’ 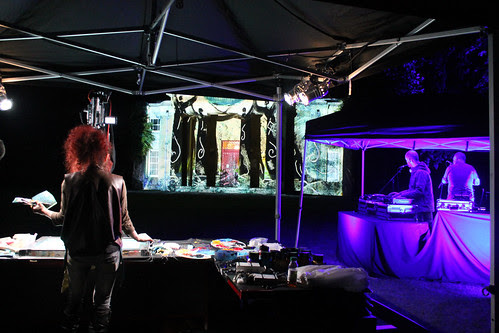 The use of live music as part of the process adds to the spectacular nature of the piece. For the work in Cambridge, Maria collaborated with three musicians based in Edinburgh, Dave Heath, Fay Fife and DJ Dolphin Boy. They composed three pieces of music for ‘Dark Matter’. ‘An Improvisation on Debussy’s Syrinx’ (Heath), ‘The Sound of Sleat’ (Fife/Levy), and ‘Dark Matter’ (Fife/ Heath/Levy) 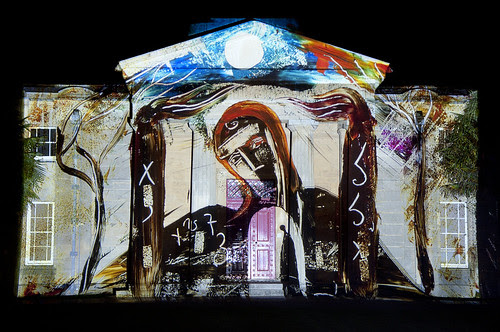 ‘This was a very exciting process for to work through.” says Ashton. ‘As soon as we started to discuss it, I knew that I could make this collaboration work and give Maria the freedom she needed to create her art. It has been very satisfying intellectually. I think that the results speak for themselves. Nothing is hidden.  The audience are encouraged to watch the painter as she develops and redevelops the work.’


NOTE: These works were presented as part of the launch of the e-Luminate festival which will be held in February 2014. http://www.e-luminatefestivals.co.uk/

ARTISTS
Maria Rud is a fine artist and painter. http://www.mariarud.com/
Ross Ashton is a Guinness World Record holding projection artists and designer. www.theprojectionstudio.com
David Heath is a composer and flautist who works internationally. http://www.daveheath.co.uk
Fay Fife fronts The Rezillos as lead singer. http://www.rezillos.com
DJ Dolphin Boy has been a part of the Edinburgh music scene for over 20 years. http://djdolphinboy.co.uk/