Awaiting the Crown of Light

Later in November I have been commissioned to create a piece for the front of Durham Cathedral. This will discuss Durham Cathedrals rich heritage and its place in the history of the region. The Cathedral dominates the town. The event will run from the 12th to the 15th of November and is part of the 'Lumiere' festival. 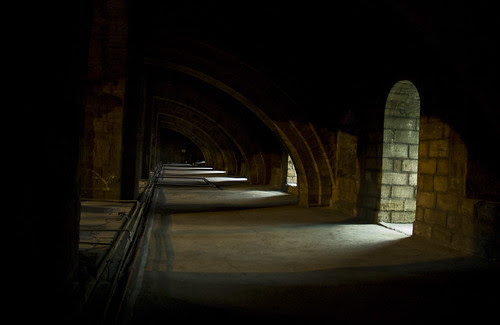 I got to wander around the upper levels of the cathedral during the photo shoot for my event. This included visiting the corridor where I was told they filmed the 'Fluffy' scene in Harry Potter. 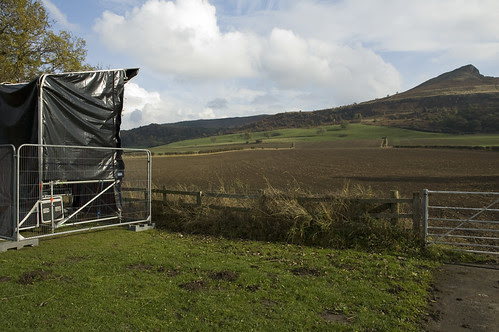 Of course it didn't stop raining. I felt sorry for the lighting crew installing the moving light high up on the slopes of Roseberry Topping with a gale blowing. However, the show night was (mostly) fine and clear if cold.

Commissioned by Redcar & Cleveland Borough Council and organized by Magnetic Events, Odin’s Glow is an ambitious series of arts installations in the small village of Newton-under-Roseberry. Located under Roseberry Topping - which has been lit with moving lights – a whole series of ats installations large and small are strung thropugh the village.

My piece ‘Landscape’ acknowledges the relationship through time between the landscape and language. Our use of language informs how we perceive the landscape. The landscape can shape our language and the way that we think. Roseberry is a transformation of ‘Odins Bjarg’ – Odin’s Hill.

I projected directly onto the landscape. At night it is difficult to judge scale but the images here are 150m wide as they hit the farthest point on the landscape. Odin’s Eye is 120m wide. 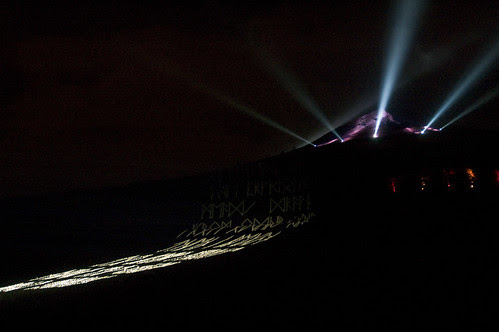 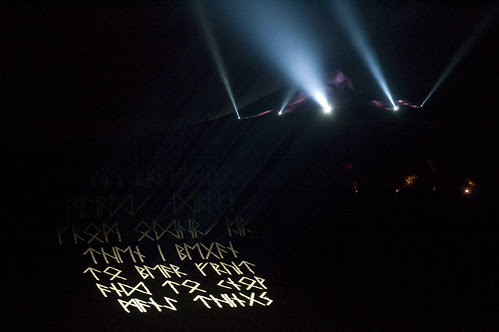 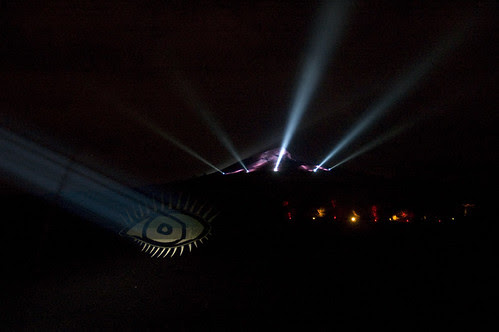 Today I start the installation of projection for 'Odin's Glow', an art festival in the village of Newton-Under-Roseberry in the North-east of England. The festival takes over the entirety of the village and is ambitious in its scope as different artists create sculpture, live theatre, projection and sound pieces scattered through the different environments of the village.

The village is dominated by 'Roseberry Topping', a hill / mountain that can trace the roots of its name back to the vikings. Roseberry came from Odins Bjarg (Odins Hill).

The weather is fine, lets hope it stays that way.

Having a lovely time in Rüdesheim

Richard enjoys his dinner 'al fresco' thanks to Zum Grünen Kranz, Rüdesheim.
When our hotel found out the timetable for the event meant that we would not be able to eat a hot meal that night, they very kindly offered to bring dinner to us; even though it meant a three mile drive up a mountain to do it! The manager of Zum Grünen Kranz, Ralf Nagler brought us pork medallions in wine sauce with noodles, with a glass of the local Riesling to wash it down. As it was freezing on the mountain with a stiff wind, this was very very gratefully received. Mr Nagler, you have the thanks of a grateful (and cold) crew.
Posted by Unknown at 10:24 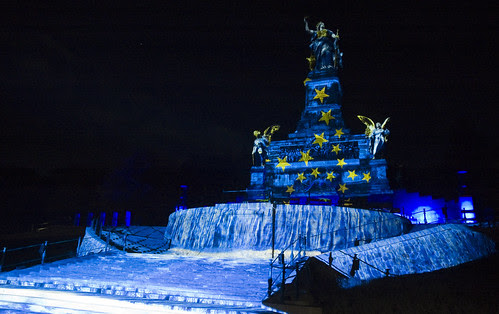 Germania is transformed into Europa. In her robes of blue and gold she stares out across the landscape of a united Europe whilst the flags of all the member states unfurl before her. The waters of all the rivers of Europe flow out from her, symbolizing a land without borders, and the uniting of the future aspirations of the peoples of Europe.

I was asked by the Rheinpartie to create a site specific projection piece that would reinterpret the statue of Germania into one of international European unity.

I had always had in mind that the statue would stand in water. At the base of the statue is a representation of the River Rhine in a human form. I have taken the Rhine to represent all the great rivers of Europe. As the waters of the river flow past, so the peoples of Europe have moved across the land, creating the landscape forms that we see today. As the streams merge to form rivers and flow onward to the sea, so the histories of the separate nations of Europe though sometimes turbulent, have now come together in unity.

Germania herself is now dressed in the blue and gold robes of Europa. She looks out across a united Europe whilst the flags of all the nations of Europe unfurl before her. The waters of all the rivers of Europe flow out from her carrying the hopes and aspirations of all the united member states into the future.

I commissioned soundscape designer Karen Monid to create the accompanying sound piece based on these ideas. For this piece, she needed to combine Beethoven’s Ode To Joy with this site specific projection in the Rhine Valley that would represent the European Union. She chose to follow the life of a river as the journeying theme. All rivers form part of the Water Cycle, which is a never ending movement of water from ocean to cloud to rain to spring, stream, river and back to ocean again. This also seemed appropriate as water and land know no borders or boundaries and so retain a sense of union.

The sound is not synchronised with the images. I wanted the sound to carry a slightly different message to the images in its cyclic nature.

This piece was created for the 'rheipartie', a series of light and video installations in the Rhine Valley World Heritage Site. The event ran from the 2 to the 4th of October 2009.

www.rheinpartie.com
Posted by Unknown at 12:29