At the beginning of the month we were busy in Wolverhampton creating our second version of "Enchanted City"  We were commissioned to produce two video installations; one for The University main entrance on Wulfrana street and the second for the side of Barclays Bank building on St Peters Square.
The work was commiosioned by Wolverhampton Council and produced by Robin Morley of Magnetic Events.

Generator
This was fantasy piece based on the idea of the university being a generator of ideas.  It was light hearted and fast moving and was fun to make.  We enjoyed creating the flying objects especially nellie the cow.

You can see the video of Generator here.

The Oldest Place
Karen Monid led out on this piece, recording anglo-saxon poetry on the theme of The Garden of Eden.  St Peters Square is the site of the original land which Lady Wulfrun donated to found a monastery.

You can see the video of The Oldest Place here.

The public reaction to the entire Enchanted Town project was overwhelmingly positive and we thank the people of Wolverhampton for being so welcoming.
Hopefully we'll be back soon.
Posted by Unknown at 11:57

Triquetra - The story of three Viking Kings for Illuminating York 2013

What can we say about York? We are always so happy to back and be allowed to create work in this fantastic city.  I will admit to being biased. I am a Yorkshireman after all, so its a privilege to have worked here so often.

Triquetra was the third work that Karen Monid and I have created here. The first was Accendo in 2008 and that was followed by Rose in 2010. Each time we have been allowed to choose an iconic part of the architecture of York to work with.

This time we really wanted to create something different. We have projected onto landscapes before, but its not often that we would have the opportunity to project onto landscape and architecture, especially not in an urban setting. This is what we found special about choosing the site of Clifford's Tower at the Eye of York as our canvas.
Standing 25m tall and 75m wide, this is a unique architectural feature in that it is still of a size that can be addressed with a reasonable number of projectors whilst still dominating the space in which it stands.

The history behind Triquetra is best read on Karen's blog (see links below), and I wont repeat it all here, except to say that it talks of three Viking Kings, Harald Bluetooth, Sweyn Forkbeard and Cnut the Great and their dynastic journey from being pagan kings of Denmark to being Christian kings of a mini empire and early kings of all England.
On the way we illustrated in sound and image:
The creation of the world from the Viking perspective.
The destruction of Lindisfarne.
The invasion of England.
The letter from King Cnut to his people from the York Gospels.
Karens Triquetra history blog entries: Part 1 : Part 2

Karen and I would like to thank:
Sang, Thierry and Steve at The Projection Studio
Richard and QED for projection equipment
Tom Vickers AVLS for sound equipment
Ben Pugh for his support throughout
and of course Illuminating York for commissioning this work.

Following on from the success of our collaboration at the Cambridge Institute of Astronomy we are planning our next event. Maria & I very much enjoyed our collaboration and we will work together again in December at St Giles Cathedral in Edinburgh. 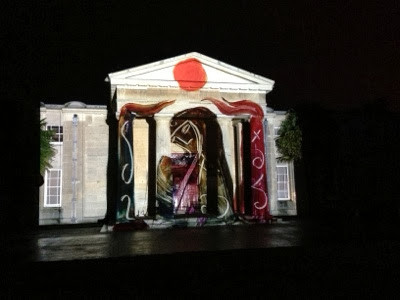 We have also launched a website to talk about all things AniMotion.
You can find it at animotion.org.uk
Also, you can follow us on twitter @animotionart

Last night saw the launch of a new artistic collaboration between Fine Artist Maria Rud and Projection Artist Ross Ashton. Together they have collaborated to bring together painting, music and projection mapping into one live experience.

Dark Matter - A time lapse condensed version of the AniMotion process. from Ross Ashton on Vimeo.

Maria Rud has been working on a project that she calls ‘AniMotion’, for some time. This gives the audience the experience of watching an artwork being developed and created in front of their eyes as Maria interacts with a live music performance.

In collaboration with Ross Ashton, AniMotion has now been taken to a new level.  Ross has created a method of mapping the artist’s work directly to the architecture. This allows Maria to create in three dimensions, directly onto the building. She is free to reinterpret the architecture in real time using traditional painting methods.

Maria Rud said, ‘By uniting music and painting through the art of projection, AniMotion immerses audiences in a world of transcendence.  By dissolving boundaries between art forms you reveal a whole new world and a new art form.’

The use of live music as part of the process adds to the spectacular nature of the piece. For the work in Cambridge, Maria collaborated with three musicians based in Edinburgh, Dave Heath, Fay Fife and DJ Dolphin Boy. They composed three pieces of music for ‘Dark Matter’. ‘An Improvisation on Debussy’s Syrinx’ (Heath), ‘The Sound of Sleat’ (Fife/Levy), and ‘Dark Matter’ (Fife/ Heath/Levy)

‘This was a very exciting process for to work through.” says Ashton. ‘As soon as we started to discuss it, I knew that I could make this collaboration work and give Maria the freedom she needed to create her art. It has been very satisfying intellectually. I think that the results speak for themselves. Nothing is hidden.  The audience are encouraged to watch the painter as she develops and redevelops the work.’


NOTE: These works were presented as part of the launch of the e-Luminate festival which will be held in February 2014. http://www.e-luminatefestivals.co.uk/

ARTISTS
Maria Rud is a fine artist and painter. http://www.mariarud.com/
Ross Ashton is a Guinness World Record holding projection artists and designer. www.theprojectionstudio.com
David Heath is a composer and flautist who works internationally. http://www.daveheath.co.uk
Fay Fife fronts The Rezillos as lead singer. http://www.rezillos.com
DJ Dolphin Boy has been a part of the Edinburgh music scene for over 20 years. http://djdolphinboy.co.uk/